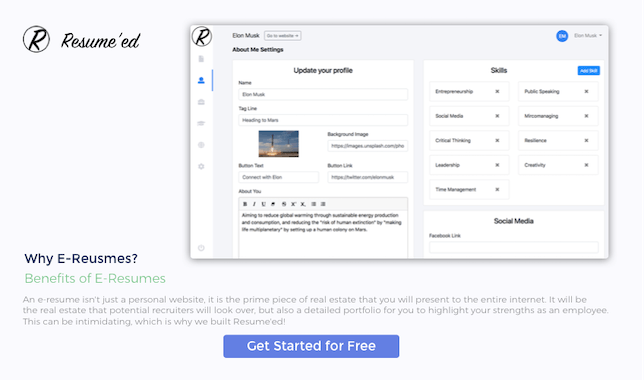 What happened to Resume'ed? A personal story.

Let's talk about something personal for a bit. This article won't be for everyone but it is something I have been thinking about writing for a while now.

Resume'ed is an e-resume builder where users can create their own little slice of the internet to showcase their work experience, projects, and skills. Resume'ed used to connect to LinkedIn to pull in your relevant data until LinkedIn hid most of their APIs behind their "Premium" package.

I started work on Resume'ed back in September of 2018. Looking back, I used Resume'ed as an outlet to distract me from some personal chaos that I could no longer ignore. This chaos started in my second year at University and while I continued to attend school I used that time to distract myself with running my own business, and attending classes.

In April of 2018, I graduated and no longer had that distraction. When I started Resume'ed I would spend late nights, early morning and all day thinking about Resume'ed to distract my thoughts from anything else.

I had originally hoped to build and launch Resume'ed in the month of September but I remember the anxiety starting to kicking in. Near the end of September Resume'ed was pretty much good to go but I continued to find reasons not to launch it until finally I had run out of reasons, and in March of 2019 I finally launched on Product Hunt.

Right away people saw the potential of Resume'ed. More people than I could have ever imagined were visiting the site, reaching out, and signing up. Within the first week I had people paying for premium access and connecting their personal domains to share their Resume'ed sites. I started seeing Resum'ed sites pop up around the internet, I found a few on Reddit, Twitter, and LinkedIn. This was when for me the anxiety I was originally feeling kicked up a notch or ten.

I started out with a Kanban Board to track feature requests, and remember launching a couple of features people were asking for. For example, the ability to export your Resume'ed to a PDF that could be submitted for jobs. However, during this time I kept having this anxiety about letting people down, or getting hacked, or something. Then LinkedIn changed their API.

Getting a reason to quit

LinkedIn changing their API gave me the final push to stop developing Resume'ed. I stopped working on the project and just maintained what was already there. All the features I had started are still in Git branches waiting for me to come back to them.

Final thoughts, I hope this all makes sense, and I know this article kind of came out of nowhere, but I am glad to finally get it off my chest and articulated. I hope in time I can come back to Resume'ed and give it the treatment it deserves. If you got this far, thank you for reading this long ramble.

Craft your personal brand with a unique e-resume